The chemical industry is heavily relying on heterogeneous catalysis for the synthesis of the thousands of compounds required in today’s complex world. For continuous operation fixed bed catalysts are often preferred from an operational point of view. The reactor needs to be filled once and the catalyst can stay in operation for an indefinite period of time. The feed product can pass through the reactor bed and the final product is synthesised and collected for further purification. No cumbersome separation of the catalyst is required.

Unfortunately, we seldom have such ideal conditions and the process engineers need to carefully weigh investment and operating cost as well as product yields with slurry bed reactors. A slurry catalyst is more complex to handle as it is fed into the reactor as a powder and needs to be removed from the product stream for recycle. However, it offers a number of benefits compared to a fixed bed reactor.

Flexibility and efficiency of slurry bed reactor accounts for its popularity

From above analysis it can be understood why slurry bed reactors have such widespread use. Especially in fine chemicals where process conditions need to be tuned regularly, a slurry bed catalyst offers more degrees of freedom. However, to guarantee stable reaction conditions the catalyst concentration should remain constant over time. Additionally, catalyst hold-up in the separation equipment should be reduced to the minimum. This requires a constant recycle of catalyst from the product feed. Therefore, a continuously operating separation equipment is of benefit.

In contrast to a batch operation where the separation equipment can recycle or purge the catalyst during the down time, in a continuous production no down time period is permitted. Depending on the type of catalyst, process conditions and ease of operation a few types of equipment are applied. Decanter centrifuges and cross-flow filters are typical examples.

While decanter centrifuges can operate reliably with fluctuating feed conditions they are often not able to produce the required product quality as catalyst fines remain in the product stream. Also, abrasion of the catalyst as well as the high speed rotating parts leads to maintenance and down time while increasing concentration of fines in the product stream. Finally, when full containment is required, gas tight design must be applied to decanter centrifuges, which further increases the complexity and the cost of the system.

Pros and Cons of traditional Cross-flow filters for catalyst recovery

Cross-flow filters come in many forms. For catalyst separation which is often done at elevated temperatures, rigid membranes, preferably made of sintered stainless steel or ceramics are applied. While these filters offer excellent product quality their main down side is plugging of the fine filtration surface over time. Due to their rigidity there is hardly any means to clean them in situ. Regenerating those elements is a complicated endeavour which requires complete disassembly and off-site treatment under high temperature for pyrolysis of the entrapped scale. Cross-flow filters normally operate at high tangential velocities, typically between 3 and 5 m/s. The high shear rates which are developed at those speeds reduce the laminar flow layer at close range of the membrane surface and therefore prevent solids accumulation which would reduce permeate flow, eventually leading to fouling. However, such shear rates also put additional strain on the catalyst particles creating abrasion and forming fines. These fines reduce filtrability and require tighter membrane porosity, which again enhances fouling. Finally, these high tangential velocities come with a pressure loss between the feed inlet and the retentate outlet. Hence, the transmembrane pressure (TMP) is higher at the inlet than at the retentate outlet, which results in non-uniform filtration characteristics across the length of the module with higher fouling tendency. 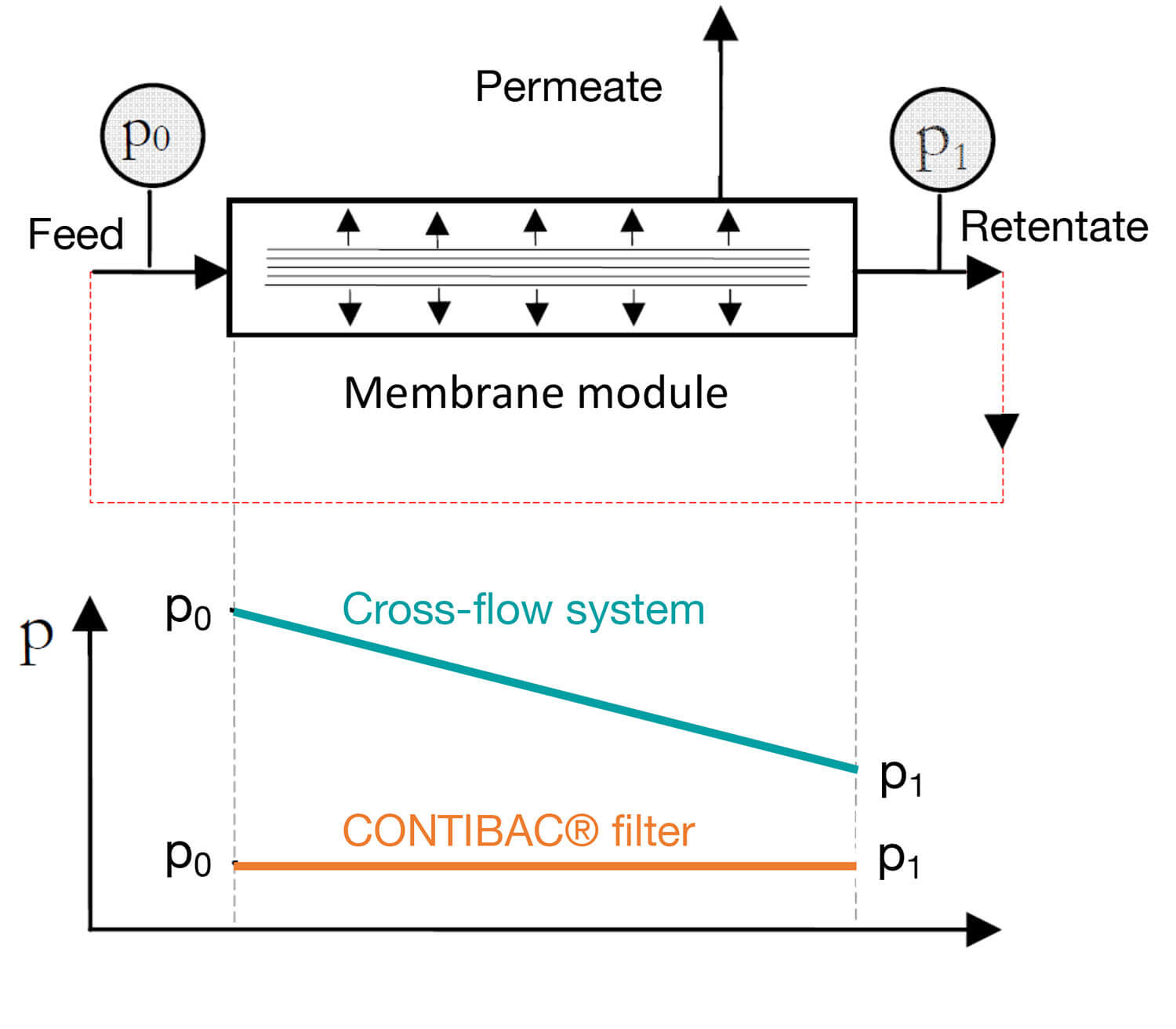 The CONTIBAC® is a viable alternative for continuous catalyst recovery

As an alternative to the above, a continuously operating CONTIBAC® can offer a number of advantages. Its basic filter operation resembles a cross-flow filter system, with the main feed entering at the top and the retentate exiting at the bottom, the gravitational force is effectively used in addition to the downwards flow to continuously remove the catalyst from the filtering membrane.

CONTIBAC® filters apply a flexible filter media which is much more resilient to any kind of blocking when compared to rigid elements. As a result the filter can operate at significantly lower differential pressures. In a CONTIBAC® filter the TMP is constant and always lower. Lower pressure drops reduce compaction of the solids adjacent to the filtering membrane which enhances removal of the catalyst particles. Additionally, the cross flow velocity can be lowered, reducing abrasion of particles. The overall particle size distribution is maintained over a longer period of time which increases the life time of the catalyst.

Normally, filter membranes with pore sizes matching the particle size distribution of the catalyst are applied. This enhances the risk of having catalyst fines in the filtrate during the initial phase of usually 10-15 seconds. However, this can easily be recycled.

From the operational side, smaller pumps and pipe sizes can be applied. If or when required, individually controlled filtrate groups within the same filter vessel allow independent regeneration at certain intervals while the rest of the groups remain in operation, ensuring constant flow. The well-proven concave-convex form of the filter element effectively releases solid scale and prevents fouling.

Should the filtering media eventually fail, they are easily replaced at significantly lower cost when compared to sintered metal or ceramic elements.

Needless to say, these high performance systems run fully automatically and have a proven track record for many applications across the processing industry. 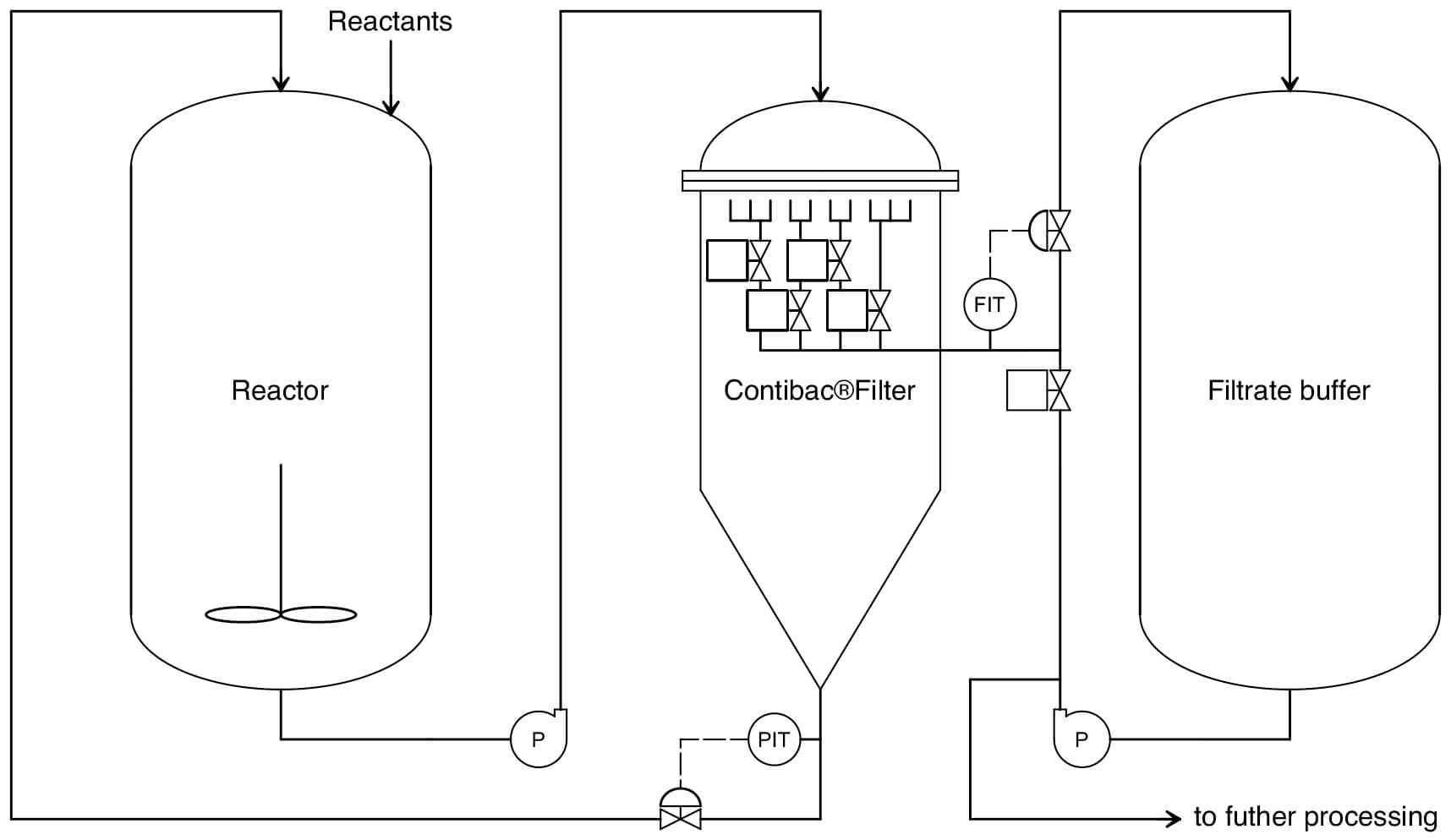 The company was originally running a continuous hydrogenation process with sintered metal filters applied for the continuous recycling of the Pd catalyst into the reactor. However, due to frequent fouling of the elements the process was essentially discontinuous as the filter needed to be opened manually and cleaned.

They decided to rent a 4.5 m2 continuously operating CONTIBAC® pilot unit to understand the feasibility of such a solution. They initially encountered two issues:

In the meantime, the client has a number of filters in operation and is happily recommending this technology.

For a green field project, the company was looking for a continuously operating catalyst filter solution which promises less fouling than what they were used to. A continuous CONTIBAC® was finally chosen. The original design was such that by applying a low TMP and high enough cross flow speed no further means for solid removal are required.  However, for safety reasons a flush back system was implemented which allowed uninterrupted filtration. After commissioning and startup it was noted that after a 12h filtration period the TMP started climbing. Hence, the back-flush was put into use, which could completely recover the flow. In the meantime, the second system has been delivered in another green-field site. 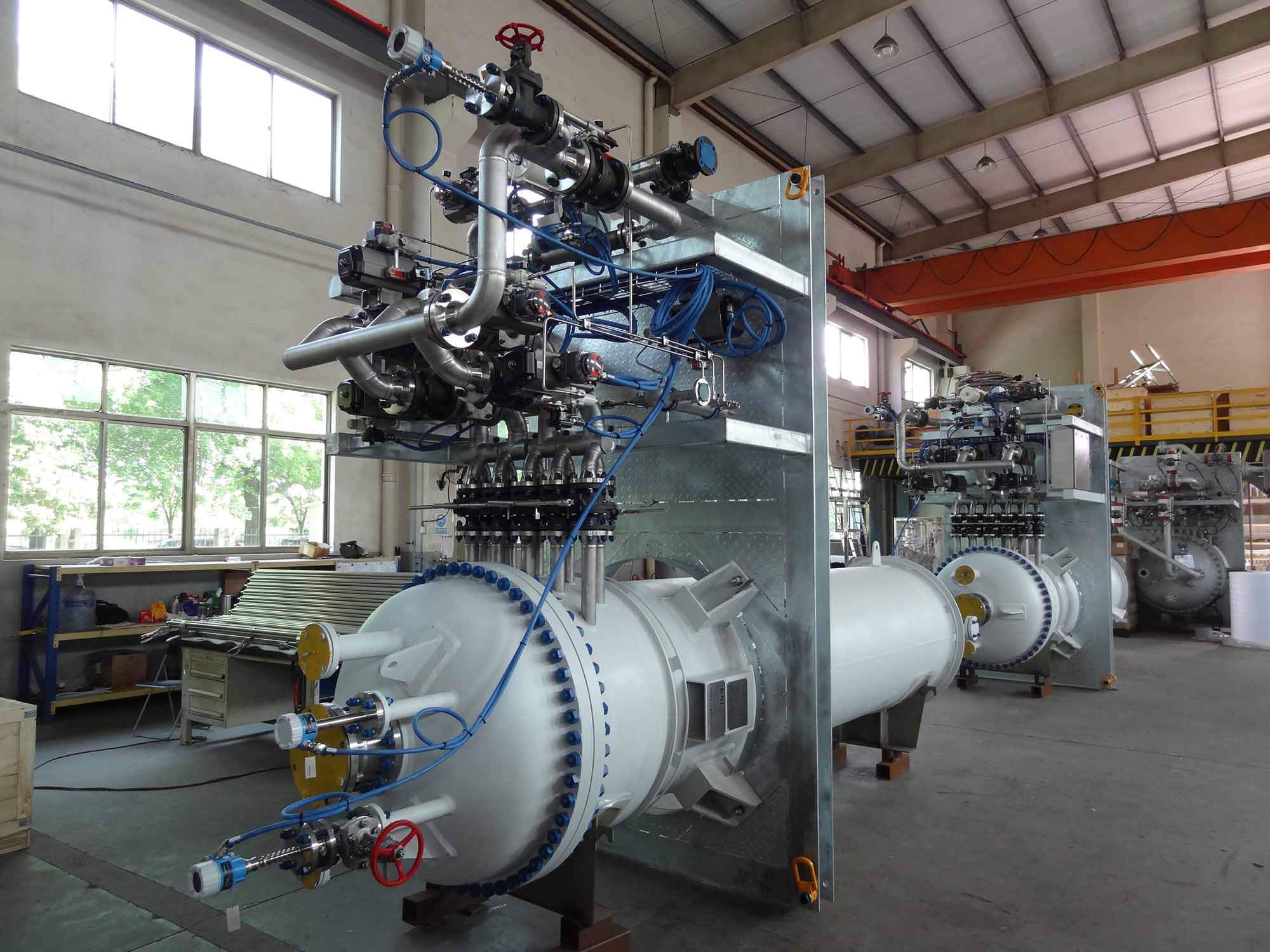