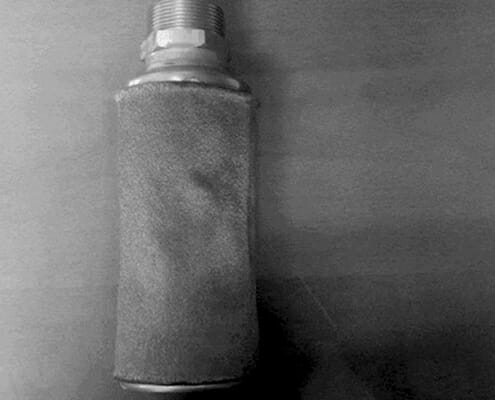 For liquid filtration at high temperatures the material of choice is often sintered metal powder (PM) type filter. Tubular elements are available in a range of alloys and with pore sizes below 1 micron. The operational life of the media can easily extend over years, and its low maintenance is a strong argument for adoption. At least, in theory…

In practice it is often another story. While there are cases where PM works as promised, there are instances where the results disappoint. To understand the reasons for this, we need to take a closer look at the design of such a sintered PM element:

The element wall is built of narrow sized stainless steel powder, which is sintered at high temperatures to form a rigid, but porous structure. Since the pore size is determined by the size of the sintered particles, the finer the particles, the smaller the resulting pore size.

In solid/liquid separation, typically a fraction of those particles finer than the pore size of the filtering media pass through, the largest particles are held back in the filter cake on top of the media and some get stuck within the PM structure. It is this last solids fraction, which normally cause trouble, because the rigid porous layer prevents any movement and back-flushing does not always remove those particles. Over time trapped solids accumulate and begin clogging the porous metal. Ultimately, the PM elements need to be either chemically treated to dissolve the entrapped solids, heated to a high temperature to burn off the impurities, or they have to be replaced altogether.

As an alternative to traditional sintered PM elements, and specifically to address operational deficiencies, DrM has recently developed a new type of filter media built on a 3D-woven structure made of stainless steel microfiber. This media has a significantly higher open area for flow than PM, but is still capable of retaining particles down to the 1 micron range. Another key feature is that the woven structure flexes outward during back-flushing. This expansion movement releases trapped particles, thus preventing solids build up and eventual clogging. In addition, the media is rated for temperatures well above 300ºC and both slurry and dry cake discharge is possible.

In short, the woven stainless steel microfiber elements significantly extend the application range of our filtration products without sacrificing any of the process options the well-established FUNDABAC filter provides.

Selecting this media makes sense for applications with high temperatures (above 200ºC) and where the feed solids have a tendency to clog. Target markets are in chemical syntheses where catalysts need to be removed at high temperatures, and in refineries for the removal of FCC catalyst fines from heavy cycle gas oil.